I to make you aware of a very destructive piece of malware/virus that is currently making the rounds on the Internet. 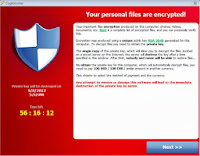 Above is a screen shot from the cryptolocker virus. Click on image for a larger view.

The name of this program is called “CRYPTOLOCKER” (is commonly referred to as CryptoLocker or Trojan:Win32/Crilock.A.) and it is considered a high security threat that does not yet have a resolution at this point in time.  Therefore, making sure to maintain good backups of server and PC files is of the utmost importance, and prevention is the key to protecting the integrity of your data.

CryptoLocker viruses are aggressive computer infections that are classified as malware in the ransomware category. The CryptoLocker virus is dangerous for reasons concerning cyber crimes relating to credit theft, extortion, and identity theft.

The CryptoLocker virus blocks access to a Microsoft Windows PC or gives the user only limited access to the computer system. Once installed on your computer, CryptoLocker encrypts your files, rendering them impossible to open unless you purchase a decryption key from the hijackers. In order to unlock the computer system and restore a backup of encrypted files by obtaining a RSA key (etc) and paying a fine (ransom) of $500, $1000, $1500, or more.

There is no guarantee that paying this fee to the hijackers will restore the integrity of your files. This particular form of ransomware is more egregious than others because even after it is eradicated from a workstation, the user’s files are still encrypted and cannot be unlocked. Once the ransomware is removed, clients lose the ability to pay the hijackers the fee to unlock the files.

Paying the fine will not remove this CryptoLocker lock-screen, nor assist you in retrieving lost data and files.

How does CryptoLocker get onto a computer?

This malware is contracted by clicking on email attachments or through social engineering methods.

CryptoLocker viruses can be contracted via freeware, shareware, codecs, suspicious advertisements, email spam, and torrents. A user reported to have contracted the CryptoLocker computer infection by clicking a banner advertisements at the top of a legitimate website stating that the viewer was the 1,000,000th visitor.

The way CryptoLocker spreads from one user’s workstation to a company’s entire network is also dangerous and a very real risk.


Once CryptoLocker has been downloaded and executed by the downloader, it ensures its automatic start during boot by using the following registry value:

Once the system is infected, CryptoLocker tries to establish a connection with its command and control server. The malware has two possible ways to contact its master: First by contacting the hardcoded IP 184.164.136.134, which has since been taken down.

If that fails the malware will start generating seemingly random domain names using a domain generation algorithm. This is done by creating a seemingly random string of characters based on the current system time and appending it to one of the following seven possible top level domains:
If you know the algorithm, you are able to predict which domain name the malware is going to contact on any given day, thus allowing the attacker to set up new domains in case old domains or the abovementioned fixed IP is taken down. The following randomly generated domain names to be active:
Once a suitable command and control server has been found, the malware will start to communicate through regular HTTP POST requests.

HTTP merely acts as a wrapper though. All actual data exchanged during the communication between the bot and its command and control server is encrypted using RSA. The public key used for the encryption of the communication is thereby embedded inside the malware file.

Using RSA based encryption for the communication not only allows the attacker to obfuscate the actual conversation between the malware and its server, but also makes sure the malware is talking to the attacker’s server and not a blackhole controlled by malware researchers.

Once the system has been successfully infected and a communication channel to the command and control server has been established, the malware will start the encryption process by requesting an encryption key. A typical request includes the version of the malware, a numeric id, the system’s network name, a group id as well as the language of the system.

The command and control server replies with the victim’s IP address, as well as a unique RSA public key, that will be used by the malware during the further encryption process.

As soon as the infection specific RSA key has been obtained, the malware will look for files to encrypt. It does so by searching through all connected drives, including mapped network shares, for files matching one of the following patterns:

For each file matching one of these patterns, the malware will generate a new 256 bit AES key. This key will then be used to encrypt the content of the file using the AES algorithm. The AES key is then encrypted using the unique RSA public key obtained earlier. Both the RSA encrypted AES key, as well as the AES encrypted file content together with some additional header information are then written back to the file.

Last but not least the malware will log the encryption of the file within the HKEY_CURRENT_USER\Software\CryptoLocker\Files registry key. This key is later used by the malware to present the list of encrypted files to the user and to speed up decryption.
Based on the file types list, it is also clear that business users are specifically targeted. Crypto malware intended for home users will target music, picture, and video files. This malware though primarily targets file formats used by companies, completely ignoring common home user file types.

Unfortunately, once the encryption of the data is complete, decryption of the data  is not feasible. To obtain the file specific AES key to decrypt a file, you need the private RSA key corresponding to the RSA public key generated for the victim’s system by the command and control server. However, this key never leaves the command and control server, putting it out of reach of everyone except the attacker. The recommended solution is to restore encrypted files from a backup.

The FBI reported on their web site on 07/18/13—... a version of ransomware targets OS X Mac users. This new version is not malware; it appears as a webpage that uses JavaScript to load numerous iframes (browser windows) and requires victims to close each iframe. The cyber criminals anticipate victims will pay the requested ransom before realizing all iframes need to be closed.

The simplest way to remove the ransomware’s iframes is by clicking on the Safari menu and choosing the “Reset Safari,” option, making sure all check boxes are selected. You may also hold down the Shift key while relaunching Safari, which will prevent Safari from reopening windows and tabs from the previous session. Victims can also disable the reopening feature across OS X from the General pane of System Preferences.

You can attempt to remove it yourself or you may want to opt for the recommendation: take your PC to a qualified A+ Certified computer technician.

Unfortunately, there is no inexpensive way out of it. Expect to pay approx $200-$300 to get it removed from your system. What you do NOT want to do is pay the scammers their ransom. They will take your money, and you will still be left with a locked PC.

What where? What is Ransomware? Ransomware, correctly called cryptoviral extortion, is an insidious type of MalWare that, as it’s name implies, holds your computer hostage by locking it up, preventing you from using it, stopping you from accessing your data, or any other information on your system, until you pay a “ransom”.

The Ransomware usually displays an official looking screen, claiming to be the FBI or some other law enforcement agency, stating that you have child pornography or other illegal content on your system. Your system is locked and disabled until you pay a “fine” to the supposed law enforcement agency, and if you don’t, it threatens you with jail time.

All of this, of course, is fake. Nothing more than a scam. According to Trend Micro, the first cases of orignal ransomware infection were seen between the years 2005 – 2006 in Russia.

There are actually THREE variants of “ransomware”. According to Microsoft: 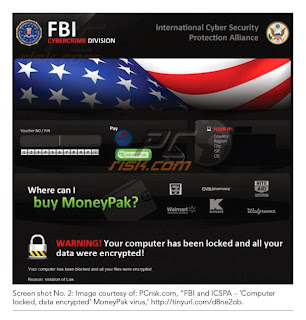 The virus asks for payment that can be transfered over the Internet, is secure, and provides some protection for the criminals. These forms of payment include: MoneyPak, Bitcoin, Web Money, and Liberty Reserve. Liberty Reserve has been shut down as of June 2013. 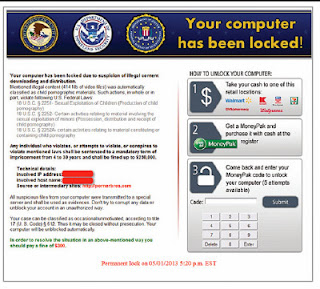 The Department of Justice has shut down Liberty Reserve after an 18-month investigation -- online payment service provider Liberty Reserve in Costa Rica. Prosecutors have accused the service of laundering $6 billion for 1 million users worldwide, and serving as the bank of choice for the black market, including hackers.


How to protect yourself:

To prevent infection, adhere to the following rules:
Also, refer to "Free virus/malware/spyware protection for Windows" in my previous post: Open-Source Software. 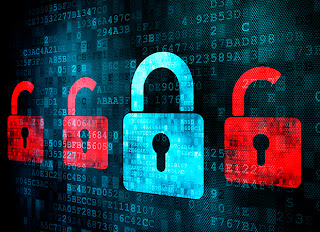 From the FBI's website: October marks the 10th anniversary of National Cyber Security Awareness Month. Established by presidential directive in 2004, the initiative—administered by the Department of Homeland Security—raises cyber security awareness across the nation by engaging and educating public and private sector partners through a variety of events and programs. The ultimate goal is to protect the country from cyber incidents and respond to them effectively if they do occur.
Note: The FBI's website is a good source for cyber safety information and to verify information.

99% of the time I can tell when an email, an attachment, a file, a download etc. contains a virus. That is because I understand "social engineering." I have never seen my most of my techniques anywhere, so I will list them here. Here is how I can tell:

Did you think about trading with the ultimate Bitcoin exchange service - YoBit.

Are you exhausted from searching for bitcoin faucets?
Triple your claiming speed with this amazing BITCOIN FAUCET ROTATOR.

Mine effectively with your computer or smartphone. Download MINERGATE.

DreamHost is ultimately the best web-hosting company for any hosting plans you might require.

Get professional trading signals delivered to your cell phone daily.