by The Associated Press
BILLINGS, Mont. (AP) — The death of a Montana animal trainer mauled by a pair of 500-pound captive brown bears could have been prevented if standard safety practices had been followed, federal authorities said Tuesday, as state officials revealed that the private menagerie where the death occurred has seen numerous animal escapes. 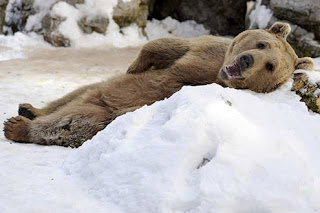 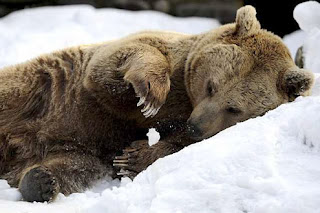 Benjamin Cloutier, 24, was killed in November while cleaning the pens of two Syrian brown bears — named Griz and Yosemite — at Animals of Montana near Bozeman. The company provides captive-bred predators and other animals for photography shoots and motion pictures.


Note: Although from Syria, the bears have  links to Al-Qaeda or any other terrorist organization.

The U.S. Department of Labor said the circumstances of Cloutier's death violated federal workplace safety rules. The agency proposed $9,000 in fines for allowing employees to have direct contact with bears and for not promptly reporting Cloutier's death.
Investigators determined the death could have been prevented if the bears had been kept in a separate enclosure while their pen was cleaned, said Jeff Funke, area director for the Occupational Safety and Health Administration.

"Those types of apex predators, it's common knowledge that they're dangerous," Funke said. "If this were a (captive) bird or a raven or something else it would have been a different story."

But Animals of Montana owner Troy Hyde rejected the assertion that Cloutier's death was preventable, saying putting its trainers inside the cages of predatory animals "is absolutely something we must do."

"We work inside a business that's a highly dangerous business, and everybody that works within this business is very aware of the dangers," he told The Associated Press. "Those people don't understand what we do. We're not a zoo."

Hyde also repeated a claim made in the days after Cloutier's death that Cloutier must have been unconscious before the mauling, possibly from a fall, because there were no defensive wounds such as bite marks on his hands.

Funke said investigators considered that possibility but found no evidence of a fall.
"From our perspective it was clearly an attack from a bear," he said.

Of the two bears, Griz was shot at the scene of the mauling by Demetri Price, the company's head trainer. Montana wildlife officials had requested that the second bear also be killed, to protect public safety, but the company refused. Price described Yosemite as a possible "bystander" during the mauling because the bear did not have blood on it.

According to the company, its captive bears have been used in "attack re-enactments" for films in which trainers are used as stuntmen. Since Cloutier's death, state wildlife officials have said they will not allow Yosemite to be used offsite, said Andrea Jones with Montana Fish, Wildlife and Parks.

The state's investigation into the mauling turned up numerous animal escapes from the company that were not reported as required under the company's roadside menagerie permit, she said.

Those included a black panther, a pair of breeding lions and a wolf pup, Jones said, adding that the escapes came to authorities' attention only after neighbors reported them in the wake of Cloutier's death.

Also, a 2004 injury to an Animals of Montana worker by a mountain lion — originally reported to the state as a "scratch" — turned out to be a scalp laceration that cut down to the worker's skull, Jones said. A doctor told investigators the man could have been killed if another employee had not stepped and sprayed the lion with bear spray.

Jones said because some of the unreported events occurred almost a decade ago and could not be acted upon now. But she said if anything of the sort occurs again, the company risks losing its permit.

Adam Roberts, vice president of Born Free USA, which tracks such incidents across the country, said it's not unusual for captive animals to turn on their handlers.

"So often we're derided as naysayers, but every time an incident like this happens it just shows how inappropriate wild animals are in captivity," Roberts said.

Animals of Montana has 15 days to comply with the OHSA fine, contest the violations or request an informal conference on the matter. Hyde said he had not yet had a chance to review the nine-page violation letter and said no decision had been made on whether to challenge the citations.

Funke said the proposed fine, though relatively small, was the maximum penalty in such a case for a business that employs 25 or fewer people.

Cloutier was originally from York Haven, Pa. He had worked as a trainer at the company since 2008 and had been in the bear enclosure hundreds of times, according to Price.
Park County officials concluded the death was accidental, and no criminal charges were pursued.

Teacher who survived polar bear mauling at zoo 'was depressed over job. 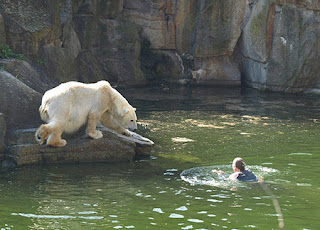 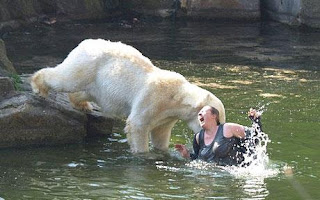 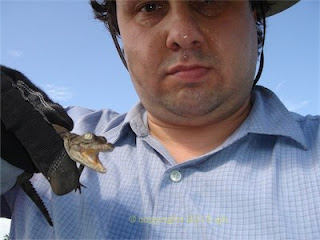 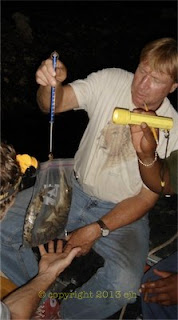