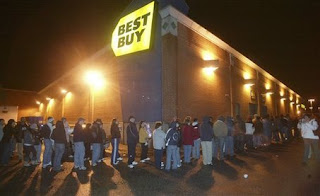 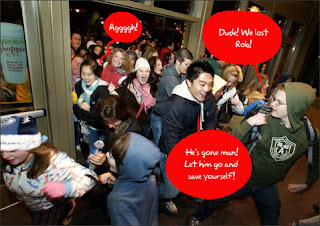 First off let me start by saying I totally oppose any store opening on Thanksgiving, even at midnight! Family is sacred! I am sure that the executives are not in their offices on Thanksgiving. More on the safety issues associated with this later.

On November 14, 2012, OSHA sent major retail stores a letter with recommendations on how to keep shoppers and employees safe. (A copy of this letter can be seen here:) The violence reached a high in 2008 when a worker was trampled to death when a mob of shoppers rushed through doors of a New York Wal-Mart.

The U.S. Labor Department is urging retailers to step-up crowd control. OSHA’s recommendations include on-site security and police officers, emergency procedures in case of danger and not blocking or locking exit doors.

To add fuel to the fire and increase the potential for workplace violence, Wal-Mart and other retailers are facing protest and demonstrations for opening Thanksgiving Day.

Federal labor officials still have made no decision on a request by the world’s largest retailer to stop scheduled protests by a union-backed group on Black Friday outside its stores. Wal-Mart claims the demonstrations organized by OUR Walmart threaten to disrupt its business and intimidate customers and other store workers. OUR Walmart has filed its own claim with the labor board, saying the retailer has attempted to prevent workers from participating in legally protected walkouts. The group is protesting what it says are low wages for Wal-Mart workers, and increases in out-of-pocket costs for their health care. 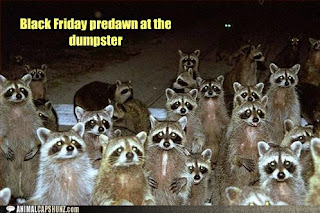 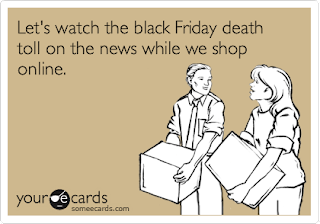 So how is having workers work on Black Friday an issue of safety? OSHA requires employers to provide a safe and healthful workplace free of recognized hazards. So what are some of the hazards being associated with being open on Black Friday.

Some of the Offenders Who Ruined Thanksgiving:

I usually don't mention companies who have erred by name, but I feel this deems it:

Thanks to retailers, Black Friday comes earlier each year. This year, some stores will roll out their Black Friday deals before the Thanksgiving dinner table is cleared. K Mart/Sears, Toys “R” Us and Wal-Mart deals will kick off at 8 p.m. on Thanksgiving night in most locations. Most Target stores will open at 9 p.m., HH Gregg opens its doors at 10 p.m. Kohl's, Best Buy, Bon-Ton and Macy's will open doors at most locations at midnight. Retail experts say it’s all meant to build up consumer demand for the day.

Some of the Good Guys:

A number of stores will keep to early morning Black Friday openings. Staples will open at 5 a.m. So, too, will Lowe's and rival home improvement warehouse Home Depot. JCPenney and Burlington Coat Factory are among the last of the major retailers to wait until 6 a.m.

Still, in some states, Thanksgiving remains off limits for retailers. Most retail employees in Massachusetts and Maine, for example, are prohibited from working on Thanksgiving, which means many stores can’t open on that day.

I can go through what to do as far as lifting, crowd control, etc. I will not, you can find that on OSHA's web site. I will leave you with this:

I found very informative blog when I was reading this. I was searching this kind of information since a long time. Thank you for sharing it.
Welcome to Green Herbz 2014 Potpourri Herbal Spice

Hi, interesting post. I have been wondering about this topic, so thanks for posting. I’ll definitely be subscribing to your site. Keep up the good posts
Herbal Potpourri

You might be eligible for a free $250 Kohl's Gift Card.