Discounter Dollar Tree Inc. has racked up more workplace-safety violations this year at its stores than nearly any other business in the country, according to federal regulators, a surprise for a chain of retail outlets that had no explosion or worker fatality. 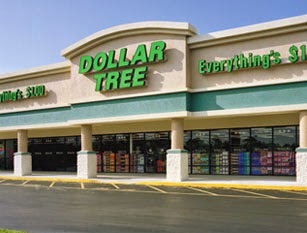 The company has received 48 violations in the past 12 months for problems such as teetering boxes, unsecured gas tanks and blocked electrical outlets that safety officials said make working in the stores unsafe.

The federal Occupational Safety and Health Administration on Wednesday fined the company $262,500 for violations at a store in Watauga, Texas, near Dallas. The fine was Dollar Tree's fourth of more than $100,000 since May and brought the company's total to $866,000 since last October. OSHA plans to announce the Watauga fine on Thursday.

OSHA chief David Michaels said Dollar Tree's recent fines and number of violations could be the highest ever issued for a retail chain. The agency typically issues 30 to 40 citations a year of more than $200,000 each, he said.

"We see a problem in stores across the country," Mr. Michaels said. "Each of these stores has some serious hazards."

Dollar Tree has agreed to buy Family Dollar for $8.5 billion, though Dollar General has made a competing offer.

Dollar Tree, which has around 87,000 employees and about 5,000 stores, said it is "committed to maintaining a safe workplace environment for each of our associates. We are currently in the process of contesting recent OSHA citations."

Of the three big dollar-store chains, Dollar Tree most closely lives up to its name, selling most of its items for $1. Dollar General and Family Dollar sell at multiple prices that generally max out around $10 an item.

Both approaches put tremendous pressure on the companies to squeeze out costs to be profitable. Sometimes, no more than two employees work in a store at once. Store sizes typically run between 7,000 and 10,000 square feet.

That can create problems during big merchandise deliveries. Storerooms are small in some locations, meaning boxes are placed in aisles for unloading. If employees are diverted from unloading goods to assist customers, aisles can be left cluttered.

At the Watauga store, OSHA found boxes blocking an exit route, cartons piled 12 to 15 feet high in an unstable manner, unsecured helium cylinders that were in danger of falling on workers and electrical panels that were blocked with merchandise, which OSHA said could have exposed employees to burn and electrical shock injuries.

OSHA said the Watauga citations resulted in especially large fines because the agency had found similar problems at several other stores, indicating a willful violation of safety laws. For example, the agency also found blocked exits at six stores in locations including Rhode Island, New Jersey and Florida.

Looking at violations across a chain has been ramped up under the Obama administration, employer advocates said.

Some attorneys who represent companies in OSHA cases criticized some of the fines for retailers. "The kinds of things they are citing are trivial," said Baruch Fellner, a lawyer who represents retailers in OSHA disputes.

OSHA's Mr. Michaels disagreed. He said Dollar Tree records reviewed by the agency indicated that employees likely had been injured by hazards such as improperly stored boxes.

Most of the inspections of Dollar Tree were prompted by complaints from store employees or managers. In the past five years, OSHA was called to inspect Dollar Tree stores nearly 80 times.

"Things are tumbling on you because the space in the storage room is so small," said Renuka Prasad, a 57-year old former Dollar Tree worker from Lehigh, Fla. She said she quit after a box of cans fell on her head. "We were always complaining to the manager, but she doesn't do anything."

Willie Baker, a former Dollar Tree cashier in Tallahassee, Fla., said she hurt her neck and shoulder lifting crates of soda. "My manager would say, 'This is what corporate wants us to do,' " said Ms. Baker, 56. "To keep your job, you just do what you have to do."

Chesapeake-based Dollar Tree Stores Inc. has been fined more than $800,000 by the U.S. Occupational Safety and Health Administration (OSHA) for repeated safety violations in the past five months, according to a U.S. Department of Labor news release. 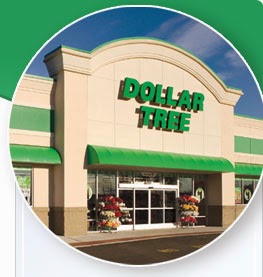 Since 2009, OSHA claims it has received complaints from Dollar Tree employees in 26 states and has cited the national discount retailer for 234 safety violations. Often, OSHA records show, the Fortune 500 company continues to have the same problems.  Most recently, OSHA is proposing $262,500 in penalties for hazards found at a store in Watauga, Texas, in April. At that Texas store, the OSHA citation says boxes blocked exit doors and passageways and that boxes were stacked 12-15 feet high in an unstable manner.

The store also failed to secure its helium tanks from falling in the stockroom and had stacked boxes blocking fire extinguishers and electrical panels, according to the citation notice. The OSHA notice also showed that Dollar Tree was cited for the same violations at different stores in the past.

Dollar Tree released this statement in response to questions: "Our company is committed to maintaining a safe workplace environment for each of our associates. We are currently in the process of contesting recent OSHA citations."

Dollar Tree had 4,992 stores and employed about 17,600 full-time and 69,800 part-time workers as of Feb. 1, according to a financial filing. Its stores are known for selling all items for $1 although its Deal$ stores also sell items for more than $1.


Family Dollar Stores said on Friday that its board of directors could not accept Dollar General’s $9.1 billion offer because of antitrust concerns as the dollar store  war continued. 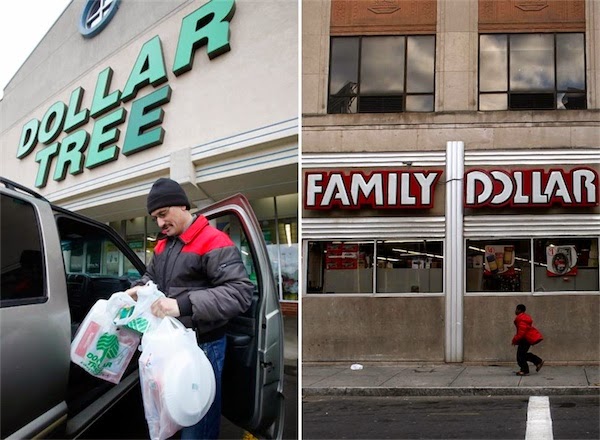 Dollar General had recently increased its bid for Family Dollar, offering $80 a share in cash, up from $78.50 a share, and saying it would be willing to sell 1,500 stores to appease federal regulators and pay $500 million to Family Dollar if the transaction is upended for antitrust reasons.

Dollar General has been trying all summer to break-up the deal that rival dollar-store chain Dollar Tree has struck to buy Family Dollar for $74.50 per share.

"Our board of directors, with the assistance of outside advisors and consultants, reviewed all aspects of Dollar General’s revised proposal and unanimously concluded that it is not reasonably likely to be completed on the terms proposed," said Family Dollar CEO Howard Levine, in a statement. "There is a very real and material risk that the transaction proposed by Dollar General would fail to close, after a lengthy and disruptive review process."

Some people, like billionaire investor Carl Icahn, have suggested that Levine has been motivated to save his own job—Levine is unlikely to retain a role with Dollar General if it is successful in buying Family Dollar. But the decision to reject Dollar General’s offer has been backed by a prominent activist hedge fund, Trian Fund Managmenet, which has a seat on Family Dollar’s board.

Garden also dismissed Dollar General’s offer to pay a reverse break-up fee of $500 million if its deal fails for antitrust reasons. "Receiving a reverse breakup fee with an after-tax value of less than $3 a share does virtually nothing to compensate the Family Dollar shareholders for assuming that risk," Garden said.

First off, safety in retail stores is often overlooked. Just because there are no obvious machines that can "chew up" employees does NOT mean that there are no safety hazards. Here are the major safety hazards and the OSHA training that I see at my retail clients:

These are no longer acceptable: 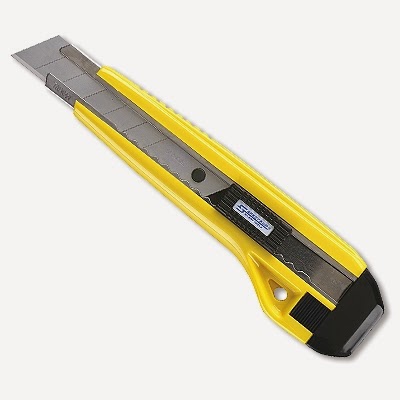 This is the Avery Easy Cut, I have one and love it!: 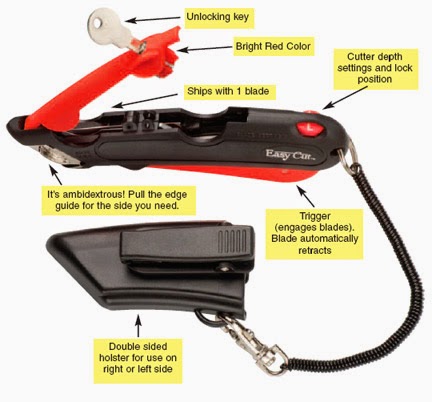 It comes with a holster....

Second, everything about dollar stores is focussed on "low cost."  I interviewed a Family Dollar executive for a paper I was writing in college. He told me that when they scout a new store location, they look for oil stains in the parking lot. People who earn less drive older cars. They know their customers very well.

With today's economy, many middle class (or what's left of it) people have migrated from the Target type stores to the Walmarts. Now they are migrating to the dollar stores. Wages are down, taxes are up, mandates (Obamacare) are up, etc. People are looking to save as much money as possible. I am sure that many safety people can attest to this fact...

That means low cost rent (for the retail space), low cost goods, and low cost employees. I am not saying that these companies ignore safety, but there are factors that correlate to "low cost" establishments. One may be the quality of the employees: they tend to be younger, less experienced, and less educated.

According to the Wall Street Journal:


Discounter Dollar Tree Inc. has racked up more workplace-safety violations this year at its stores than nearly any other business in the country, according to federal regulators, a surprise for a chain of retail outlets that had no explosion or worker fatality.

One possible reason is the increase in business is causing the company to get too big, too fast. That means not enough resources are going towards safety. I am sure that all budgets have been slashed with their purchase of Family Dollar for $9.1 Billion (yes, I said "BILLION" with a "B").

The problem that I see moving forward, is that with all mergers and acquisitions, the first thing done is eliminate all redundancy. That means eliminating the Family Dollar safety department, or as corporate PR says, blending it in.

I have seen some M&A in the past, where the acquiring company uses departments, people, technology, etc. of the acquired company that may be superior than their own. Dollar Tree may decide to keep Family Dollars safety department (in lieu of it's own) and adopt their safety practices (if they are superior to their's currently). This may solve Dollar Tree's safety issues.

To show how skewed the number of OSHA violations Dollar Tree has, I created a graph comparing the number of employees at Dollar Tree, what the combination of Dollar Tree and Family Dollar would be with out any cuts, AND the 10 largest US employers. You do the math.... 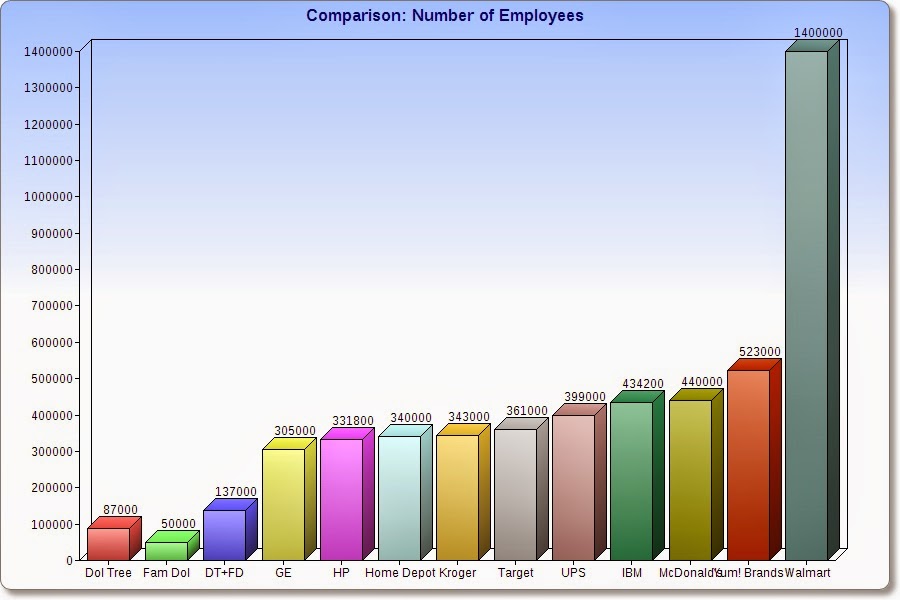 
Thank you for reading.

Try the Slice Ceramic-Blade Safety Box Cutter -- the blade lasts 10x longer vs steel and is incredibly safe vs. steel / metal box cutters. You can see it at this link : http://www.sliceproducts.com/product/auto-retractable-box-cutter

There's a chance you're eligible to get a $200 Walmart Gift Card.