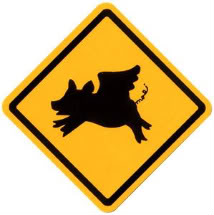 The current swine flu virus outbreak contains a combination of DNA from avian flu, swine flu and human flu viruses, (including elements from European and Asian swine viruses). That makes it a new, unique strain of swine flu that has not been scene before.


Here are some facts about the virus and flu viruses in general:

* The virus is an influenza A virus, carrying the designation H1N1.

* It is genetically different from the fully human H1N1 seasonal influenza virus that has been circulating globally for the past few years. The new flu virus contains DNA typical to avian, swine and human viruses, including elements from European and Asian swine viruses.

* Flu viruses mutate constantly, which is why the flu vaccine is changed every year, and they can also swap DNA in a process called re-assortment. Most animals can get flu but viruses rarely pass from one species to another.

* From December 2005 through February 2009, 12 cases of human infection with swine influenza were confirmed, all but one among people who had contact with pigs. There was no evidence of human-to-human transmission.

* Symptoms of swine flu in people are similar to those of seasonal influenza — sudden onset of fever, coughing, muscle aches and extreme tiredness. Swine flu appears to cause more diarrhea and vomiting than normal flu.

* People rarely catch avian flus. Notable exceptions include the H1N1 strain that caused the 1918 pandemic and H5N1 bird flu, which has killed 257 out of 421 infected in 15 countries since 2003, according to the World Health Organization.

* When a new strain of flu starts infecting people, and when it acquires the ability to pass from person to person, it can spark a pandemic. The last pandemic was in 1968 and killed about a million people.

* In 1976 a new strain of swine flu started infecting people and worried U.S. health officials started widespread vaccination. More than 40 million people were vaccinated. But several cases of Guillain-Barre syndrome, a severe and sometime fatal condition that can be linked to come vaccines, caused the U.S. government to stop the program. The incident led to widespread distrust of vaccines in general.
Posted by EJH at 11:46 AM